Hello everyone it’s Disapproving Bun Day today and I can tell you I’m a bit peeved!We had our first named winter storm over the weekend we had so much wind and rain that Mummy was so worried about Reggie the Hedgehog so she end going out to the greenhouse to put some extra food down in case the little fella didn’t want to go outside to the other feeding stations but Reggie did go and brave all that rain.we had a cold dry day yesterday and then in the evening more rain moved in it did get better for awhile this afternoon but that rain is back everything is sopping wet except for under the shed and under the BBQ where the other 2 feeding Stations are.I think both Reggie and Me are both fed up with the rain! 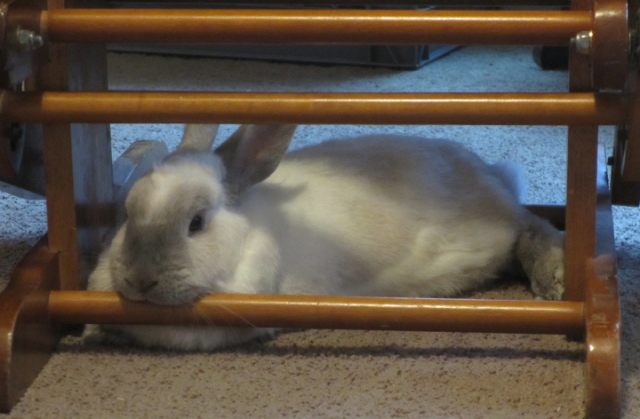 “The Paparazzi is at it again!”

Thanks To Babs Human for sending her in!

We always need photo’s of your Disapproving Bunnies so send them into rachel.dejong28@googlemail.com

This site uses Akismet to reduce spam. Learn how your comment data is processed.

I'm Titch, I'm female Rex cross Lop whos following Angel Speedy Down his Rabbit Hole. He crossed the Rainbow Bridge 19/05/2021. And was a male Himalayan Rex Rabbit who wasn't afraid of any thing. A pirate and Buccaneer and Captain of the SS.Speedy ,and was a knight of the realm with his own kingdom of Speedom. I loved getting into scrapes and having fun which has been passed down to me. So my Mum wanted to share my adventures with everyone so that everybody can love me too! I would love for you to share your stories with me about your rabbits and other pets too! My mum has had other Bunnies before me,one called Thumper who was a black and white Dutch and another one called Caramel who was a caramel coloured lop both went to the Rainbow Bridge a long time ago. Together we also write my Wild Hedgehog Diary and Bird the Jackdaw, an interesting read to check out about the comings and goings of these little visitors to my Garden.

Exploring the world one paw print at a time

For the Love of Furry Beasties

Natascha and the Cats

The adventure's of the cheekiest house rabbits

NOT JUST A PHOTO-BLOGGING SITE!!!!

Our Recipes. Our Stories. Our City.

Tales from the Romulan Neutral Zone

Of the Chief Parts of the Ruling Passion, only this can be truly said: Hate has a reason for everything. But love is unreasonable.

A peek into Megha's mind

Confessions From The Pack. A Collection Of Our Day To Day Life, From The Smells We Sniff On Our Walks To The Messed We Make When The Humans Leave Us To Play.